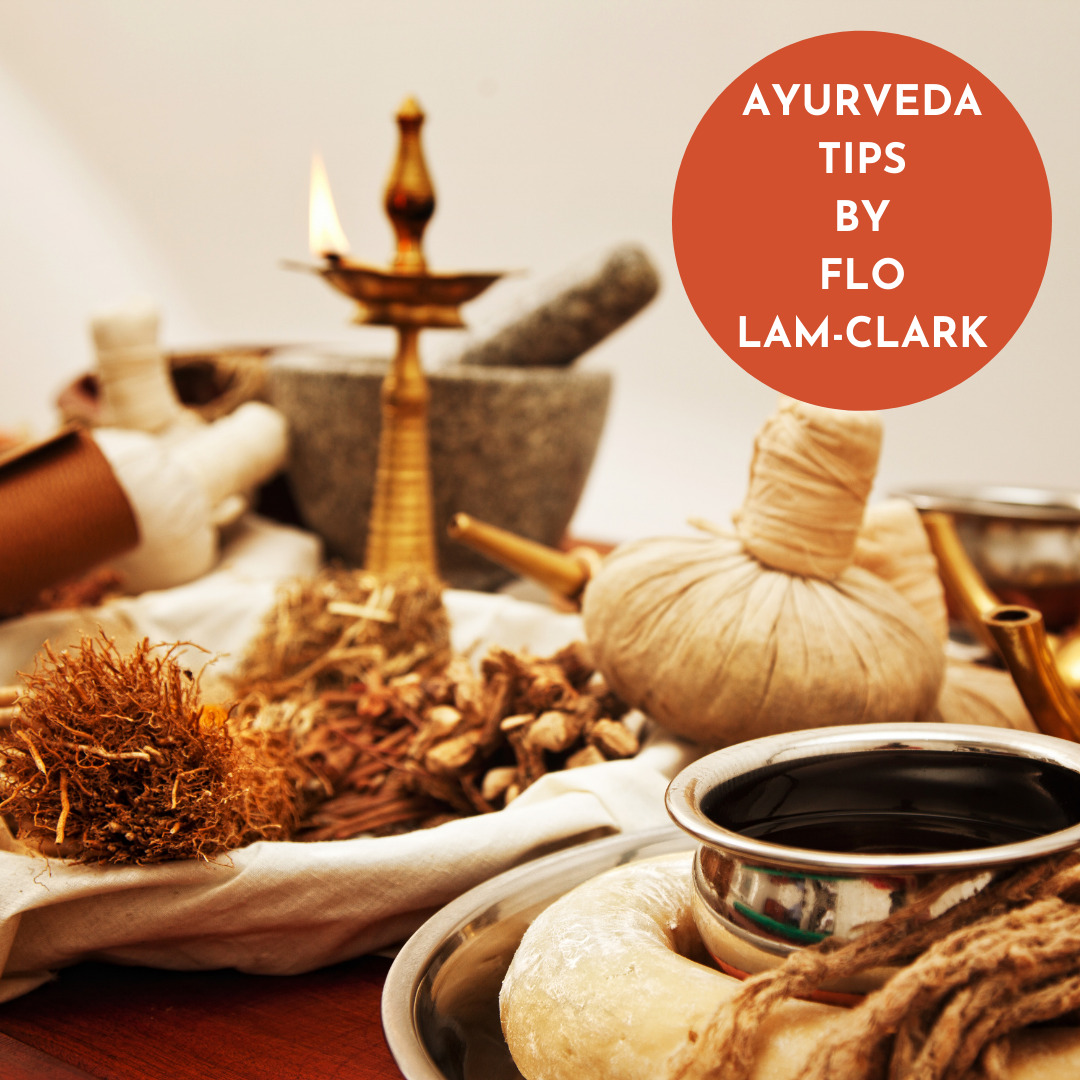 Posted at 11:57h in News by Elena Gaddini

Yoga teacher and holistic therapist Florentina Lam-Clark brings you a monthly blog, delivering tips from the Ayurveda system on everything, from beauty and diet to health and wellbeing. This month’s is themed around healthy eating and follows on from last month’s look at how to improve gut health.

Flo is running a special Ayurveda and Yoga urban retreat, part of our wellness series which aims to empower you with healing tools from the Ayurveda system. The workshop, happening on Sunday 17 July, will be exploring the Ayurvedic approach to Healthy Eating and will end with a sit-down vegetarian meal!

Read the full post below if you would like to learn how to start to incorporate these health-giving practices in your daily routine, and sign up to the workshop here.

In this blog I want to talk about the 6 Tastes, Churnas, Triphala herb and Kitchari, a nourishing meal which in the Ayurveda world is considered to be a superfood for cleansing and detoxing. I have included the recipe for Kitchari, which is a really simple dish to make, that you might want to explore for yourself, or come and try it at my next workshop on Sunday 17th July at Yogahome.

But first a little background on Ayurveda. It began over 5,000 years ago in India and it is the world’s oldest system of natural health care and medicine. It means the “Science of Living”. Ayurveda takes a holistic view of health, from the physical, mental, emotional and spiritual levels, addressing the causal level of disease, rather than just treating symptoms. The Ayurvedic system uses the natural tools of herbal medicine, diet, yoga, meditation, pranayama and self-care practices as a way of supporting optimum health and wellbeing.

*In 2004 The World Health Organisation conducted a review of Ayurveda, and their conclusion was that it provides a safe, clinically effective and needed form of health care that serves a large proportion of the World’s population. The last 20 years has seen a growing popularity in the use of Ayurveda in the West, both clinically and in growing research.

In his book, “Yoga and the quest for the true self”, Stephen Cope says,

“In yoga, the fully alive human being, is created on a daily basis by what we eat, how we breathe, how we sleep, how we move, and what we say and don’t say”.

These are fundamental pillars of good health, yet to keep up with the fast-pace of living, we short change ourselves, as we turn to fast foods, shallow breathe, skimp on sleeping hours, and stay still for hours on end, sitting at a computer. It’s time to transform this chronic way of living by making better choices.

An Interesting Perspective on Taste

We all know that healthy nutrition is based on eating fresh, organic, nourishing foods vs out of the packet, frozen and fast foods. Yet when we make poor choices, our habits around food are often unconscious, are to do with convenience, or, and can be emotionally triggered.

This is why I am fascinated about the concept of Ayurveda’s 6 tastes. Wait! I hear you say, “doesn’t the tongue recognise the 5 basic tastes of sweet, sour, salty, bitter and savoury?” The science of Ayurveda categorises the 6 tastes as Sweet, Salty, Sour, Bitter, Pungent & Astringent. It has been found that adopting the six-tastes into our meals almost guarantees that we obtain “full body nutrition.”

Taste is an outlet of our inner-intelligence to inform us of the value of food relevant to what we need at any given time. When our appetite is satiated in this way, it reduces cravings and the need to snack in between meals. It also prevents deficiencies setting in, particularly as certain tastes, such as bitter, are progressively absent in the Western diet, the implications of which are weakened immunity, poorer gut function, increased gut toxicity, and inflammation.

Each taste has a specific function and effect on the body:

It is recommended that implementing the 6 tastes in every meal will help to balance the doshas for optimum health.

Balancing the Doshas with the 6 tastes

As we start to recognise how the qualities of the Doshas start to show up in the body, then we can begin to incorporate tastes that will bring balance.

When we are full of cold and mucous or have sinusitis, which are Kapha qualities, exacerbated by earth and water elements, the pungent, heating foods like onion, rocket and ginger, stimulate agni, remove blockages and obstructions in the body.

Heartburn, or acid reflux is a sign of Pitta imbalance, characterised by fire and water elements, pungent tastes and foods will aggravate the heartburn or acid reflux but be alleviated by sweet, bitter and astringent tastes.

Bloating, gas, constipation, shows up as a Vata imbalance, which is characterised by the elements of air & ether. salty, sour and sweet foods will help to bring Vata back to balance.

This system of looking at the different doshas and the effect that different tastes has on each one, acknowledges the fact that we are all different.

Everyone digests, absorbs and assimilates nutrients at incredibly different speeds and in different ways. Everyone has specific genetic profiles which predisposes them to over or under- synthesise any given nutrient – this is also greatly influenced by lifestyle choices.

When we begin to apply this way of eating, we can start to choose foods that will help our digestion and pacify any imbalances. It helps to make meal planning and cooking a much more conscious act, after all it is so easy to fall into the same habits and patterns of eating. You can see in the table below the different categories of tastes, their actions and how they can affect the Doshas.

A good resource to check out your digestive dosha is, Bayan Botanicals website. 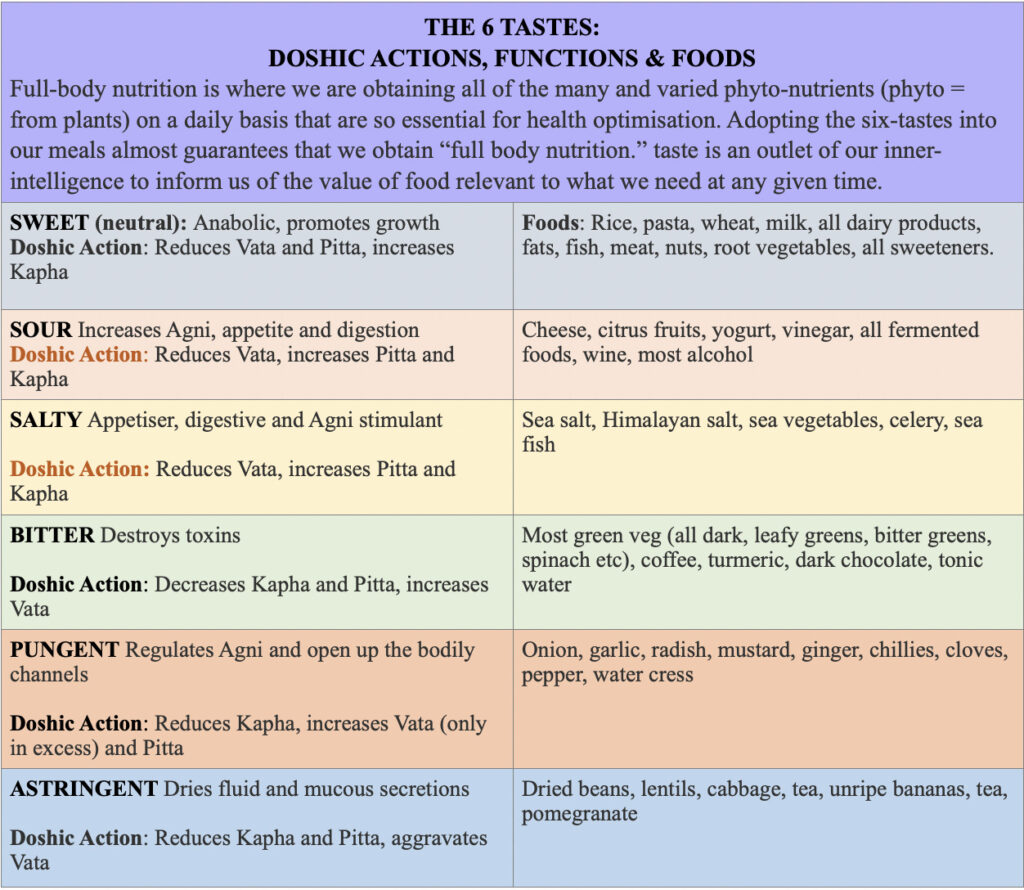 In one of the most important Ancient texts of Ayurveda, The Sushrutu Samhita, 15.38, it says, “One whose Doshas are balanced, whose digestive fire (Agni) is balanced, whose bodily tissues are functioning optimally and whose senses and mind are filled with bliss, such a one is called a healthy person.” Coming from back then, there is an emphasis and importance of the digestive powers of Agni working well.

In Ayurveda Dipana is the use of culinary and medicinal herbs – a simple and effective way to target Agni. The herbal blend and spice mixes, known as Churnas, are used to regulate and balance Agni and digestive capacity.

When utilised in foods, within the water of rice, or in the oil when stir frying, or added to porridge, the herbs and spices help to optimise digestion of the food as it passes through the GI tract. They create balance and strength in digestion. They are really easy to make and incorporate into meals.

Tridoshic Churna – Pacifies all the doshas

To make, place all the seeds in a coffee grinder to blend into a powder mix, add the Turmeric powder and keep it in a glass jar. You’ll have it ready and easy to use in cooking, sprinkled over porridge, soups and stir fries. It is fun to try and amazing to think of the effects of all the herbs on digestion.

This is a wonderful cleansing food that has been used in Indian households for centuries. It is often the first solid food given to babies and is the first meal prescribed at a small sign of fatigue or illness.

Use this basic ingredients list of traditional kitchari as your base. This recipe is extremely easy to digest and is full of protein. You can adjust the ratio to add a little more mung beans than rice, if you like. The low glycemic index of long grain white basmati rice balances blood sugar.

This simple and nourishing recipe will keep you feeling balanced and full, while allowing your digestive system to rest and heal your digestive tract and intestinal mucosa .

The Kitchari Cleanse
Ayurveda takes the view that regular cleanses, juicing and fasts are healthy and beneficial in resetting digestion.

This is especially helpful if you find you are experiencing low moods, fatigue, sugar cravings, and rely on caffeinated beverages to keep your going. The Kitchari cleanse will help to strip out the Ama – toxin build up in the body and reset your palate and digestion.

The Kitchari Cleanse lasts anywhere from one to seven days and involves eating Kitchari as the main meal at lunchtime. Eating at set times of the day and not snacking in between, is important to help digestion to work more efficiently as opposed to snacking all day, meaning digestion becomes over-worked.

Kitchari is a meal that can be experimented with and I have been exploring making it with Buckwheat Groats and Mung beans, though my preferred recipe so far is the one above with organic short grain brown rice. It is a very tasty, warming and nourishing dish. This is also a good meal to have anytime.

Add vegetables such as celery, sweet potato, mushroom, courgettes, asparagus, or any other vegetables you like. If you are just having this as an evening meal you can add meat or fish.

Ayurveda has many herbs to turn to in terms of assisting the body’s health. Triphala is suitable for all Doshic types and I think is a valuable herb to take. It is unique among herbs, in that it is comprised of 3 different fruits Amalki, Haritaki, Bhibitaki and contains five of the six tastes recognised by Ayurveda; sweet, sour, bitter, pungent and astringent (salty is the only taste missing).

This has important diagnostic benefits, as in Ayurveda, it is important to obtain sufficient volumes of all six tastes on a daily basis. To ensure this is the case, it is recommended to take half a teaspoon of Triphala at night and whichever of the five tastes present in Triphala you taste, that specific taste is lacking from your diet. You can then use this information to create better meal plans, incorporating these missing tastes to bring more harmony to the body.

It has incredible health benefits and can be taken daily to support good health. It is an exceptional digestive, liver and gut tonic herb, a prebiotic and probiotic for the microbiome, an expectorant for respiratory infections, rejuvenates and supports the liver, an immune system modulator and adaptogen, supports oral and eye health and healing for eczema, psoriasis and acne.

First thing in the morning, ½ teaspoon of Triphala powder in half a juice of lemon, with slithers of fresh ginger and a teaspoon of cold pressed honey, just add hot water for a delicious morning drink to set up digestion.

Top tips below to help digestion:

My study in Ayurveda has lead me to explore new herbs and spices and use them in ways that are easy to incorporate. I’ve discovered that the palate can adjust to new tastes, although for me, I’m taking cumin in moderation as I personally find it hard to acquire the taste. There are alternatives and we are each different in our tastes and preferences. However, this can be trained up and “educated” gradually.

In making changes, it best to proceed slowly and we don’t have to be perfect. As my Ayurveda teacher says,
“if we can be conscious of good habits 70% of the time we are on to a winner”. That leaves 30% for a bit of naughtiness! I’ll take that!

If you are interested to find out more ways to explore the Ayurvedic approach to healthy eating, as well as enjoy a sit-down vegetarian meal with likeminded people, sign up to the workshop on Ayurveda for Healthy Eating, taking place on Sunday 17th July, 2:30pm – 6:00pm.

STAY UP TO DATE BY SUBSCRIBING TO OUR NEWSLETTER!
SIGN UP HERE